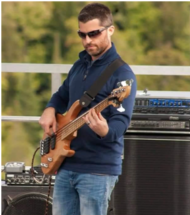 Mike Moran, currently from the Lakes Region of New Hampshire, grew up in Connecticut around a musical family and is son of Tom “Stix” Moran, drummer from the Connecticut acclaimed band Tirebiter. Mike had the pleasure of being around his father’s influences of rock-n-roll, and learned of his love for live performance while getting to sit in with the band, and share the stage with his father. Mike has been performing music with various local original bands, since around the age of 10. As a multi-instrumentalist versatile on guitar, drums, and bass, Mike enjoys gigging and recording with local musicians. He is also a hobbyist/enthusiast of home-studio recording, mixing and mastering, while producing tracks for his own projects as well as others.

While attending school at the University of Connecticut, he met friend and songwriter ‘Cody James,’ native of Laconia and UConn track athlete at the time. After forming a band, Cody invited Mike to come to New Hampshire and work on Cody’s original songwriting, playing electric guitar and later drums for the group. Mike later joined Ron Noyes Band from Concord NH, and performed for many years on drums sharing tickets with national acts like Heart, ZZ Top, 38 Special, Barenaked Ladies, Johnny Lang, among others. He also performs currently on bass guitar with singer/songwriter, Audrey Drake, and Jarrod Taylor from the northern Lakes Region of NH. Mike is now extremely excited to be part of Mike Smith’s Rockphoria project on bass guitar, and his future opporunties to continue playing and recording music with great people!